Golden retrievers are an interesting breed. They are mostly used by hunters to retrieve fowl and game, hence getting their names. They are known to be very easy to train and are very good around water. They are some of the most popular breeds for a family dog and are a great starter for anyone who is looking into taking care of dogs.

Are you interested in keeping a golden retriever at home? Do you want to know more about them? Well then, here are some interesting facts and information for kids about golden retrievers and their puppies:

If you want your Fido to go swimming then you’d better have a golden retriever – they’re one of the best breeds out there when it comes down to crossing rivers and most bodies of water. This is due to the fact that they have been associated with fowl and game retrieving (as mentioned above). Golden retrievers will be very natural around water.

Given that fact, if your grandma lives in a home and often feels lonely, you should get her a golden retriever – even just a puppy can help put a smile on her face. Depression is something that happens to anyone and can be lessened if you’re around pets such as the golden retriever. They have excellent training skills and are very attentive, making them good for spreading some TLC.

#3: In 1925, golden retrievers were first officially recognized by the American Kennel Club (AKC).

Being one of the oldest dog breeds in the world, the golden retriever truly deserves to be recognized first, and today, they are still one of the most popular dog breeds not just in the United States (see below), but also around the world.

#4: Golden retrievers can also be very good with cats and other pets in your house.

If you have more than one kind of pet at home, such as if you have cats, you can definitely get a golden retriever to work well with your feline friend. Just as golden retrievers make excellent therapy dogs, they can also take care of other pets around your house as if they’re family.

#5: Most TV shows and movies will feature a golden retriever due to its ease of training.

There are a number of dog superstars out there that are golden retrievers. It’s no surprise because of the ease of training that you can give for this kind of dog breed. Hence, most Hollywood sets will definitely look for a golden retriever to star on their next movie or show.

#6: There are three sub-breeds of golden retrievers: the English, the American and the Canadian.

The American golden retriever lives mostly in the United States and is characterized by medium length coats. The English sub-breed has thicker coats and a leaner body, perhaps due to the nature of where they live – Europe. Canadian golden retrievers, on the other hand, tend to have shorter coats.

#7: They shed a lot, but their double coats can repel water instantly.

If you don’t really have a lot of time to groom your dog then the golden retriever may not be the best for you – they shed nearly the whole year. This is why you need to groom them as much as possible in order to keep them neat and to maintain an allergy-free space at home. With this fact, their double coat can also be water-repellent, which adds to their swimming capability.

#8: According to the AKC, they place third in all of the United States when it comes to dog breed popularity.

It is no surprise that the golden retriever is one of America’s most preferred dog breed – they are super easy to train and are very friendly to others while being loyal to their owner. Even in the rest of the world, this kind of dog breed continues to dominate others due to its ease of training.

#9: They rank fourth in terms of intelligence when it comes down to dog breeds.

This amazing feat puts them near the genius quality of German Shepherds, Poodles and Border Collies.  Intelligence is the very key that makes these dog breeds very trainable and easy to give instructions to. This is also important because training a dog requires a lot of patience but for beginners who want to keep a dog, the intelligence of a golden retriever is by far the one of the easiest to cope with.

#10: You will mostly see them with the cops because of their search and rescue capabilities.

Do you ever see those policemen and military people use canine units or dogs to sniff out bombs in high-security areas and events? That is where the golden retriever also excels at – keeping you secure by finding out if there are bad stuff near your neighborhood due to their keen sense of smell. Therefore, they also make great police dogs that can help out people in situations where bad guys such as terrorists may cause panic in a town or city. 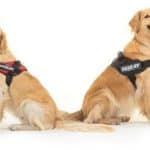