Golden Retriever is one of the most popular breed worldwide. It is well-known not only for its friendly personality but also for its gorgeous golden coat. However, there are not only just one type of golden retrievers. There is a variety, and the most common two are American Golden Retriever and British Golden Retriever. So what are the differences between the two?

When it comes to Golden Retriever and American Golden Retriever, there is much confusion as well as many debates. Have you ever wanted to know the difference between them?

To help you understand more about these two dogs, we’re here to list the main differences between these dog breeds. Keep reading this article so that you can more easily make your decision when choosing between them.

Nowadays, one of the most famous breeds of dogs is the golden retriever. These dogs originally come from Scotland. They are known as hunting dogs due to their ability to find as well as bring back all the hunted prey as the hunters do.

For the best result, we can choose the golden retriever for this task. So, why? it’s because these dogs are obedient. They can be able to learn skills and tricks in no time.

Then, this dog breed was mixed with other breeds to create a variety of them. In spite of that, there are two most common ones including the American golden retriever and the English cream golden retriever. THE BKC AND AKC STANDARD

The difference originates from the definition and acceptance of two organizations in America and Britain: AKC (American Kennel Club) and BKC (British Kennel Club). The breed was first recognized by the BKC in 1911 and later was recognized by the AKC in 1934. Through time, the standard of each club has changed to adapt to the preference of dog owners in their region. Thus, there are slight differences in terms of appearance to distinguish the dogs. Usually, British Golden Retrievers are also called as English Creme Golden Retrievers in order to differentiate from American Golden Retrievers.

These two dogs may have differences in some ways. However, they still are common similar in other ways. Both of them are known for a high level of sociability towards people as well as other pets around.

For both of them, you can play the game of fetch or catch with them because these dogs can be able to bring it back.

When mentioning behavioural issues, the American Golden Retrievers are less calm than the English golden retrievers. The fact is that the American golden retrievers are very good at athletics. These dogs are full of energy. When it comes to the training process, it’s easier to train the English Golden Retrievers compared to their counterpart because these dogs are actually calm. So, they can learn more quickly.

Beside the color, standards for the coat from both clubs differ too. Under the AKC, it is stated that a Golden Retriever has two layers of coat: a dense and water-resistant topcoat and a soft undercoat. The topcoat is firm, not silky, sometimes wavy but mostly straight, and close to the body. The areas such as neck, thighs, or tails have heavier feathering, whereas such as heads and paws are only covered by a short layer of coat. For American Golden Retrievers, it is not recommended and sometimes is undesirable to let the coat grow excessively in length. Thus, regular trimming to keep the coat in a neat length is highly encouraged. However, unlike other breeds that dog owners can perform various hairstyles on, any cutting or trimming that goes against the natural look of the coat is not recommended.

The standard of the BKC is simpler, yet implies similar features. For English Creme Golden Retriever, the topcoat should be flat or wavy.

In general, when comparing the two subtypes, American ones tend to have thicker coat and straighter feather, while English ones are commonly seen with wavy fur. Both types similarly have water-resistant coat as their origin was truly retrievers. The American Golden Retriever is known for a head structure. It’s broad-skulled and arched. The dog has the arch that stretches laterally and longitudinally. This dog breed has medium to large dark eyes. In addition, they come with closely-fitted rims. They normally come with short ears with the front edge in the right above their eyes. These dogs have medium-long necks.

The English Golden Retrievers are determined by a well-balanced head. They come with a broad skull. It doesn’t offer a sense of coarseness. These dogs come with moderately sized ears. There is a reasonable distance between their two eyes. These dogs seem to be a well-built appearance because of their necks.

Eyes: The eyes of American Golden Retrievers are large and well-rounded with dark brown color and fitted rims. Medium brown eyes are also accepted. Eyes with shapes other than round are not acceptable. Similarly, the standard of the BKC for English Creme Goldens states that their eyes should be from medium to dark brown and well-rounded. Additionally, their eyes are also reasonably-distanced.

Neck: Both American and English Golden Retrievers should have medium-length necks with muscular appearance.

Health and Expectancy of Life

The fact is that American Golden Retrievers are great choices to keep in your family. However, if you are looking for the slightly more mellow temperament, we recommend you to consider getting the English Golden Retrievers.

Which Breed is Better?

To answer this question, it is totally up to the dog owner and their preference. Both subtypes are quite similar in appearance and personality, and above all they are all good dogs to have. Most of the differences lie in the body figures, which is only an aesthetic matter. If you like a golden retriever with golden coat, an American one could be a great fit. On the other hand, if you prefer a cream-colored retriever, an English one would be better. Regardless of the color and some slight differences, both kinds are fun, friendly, and obedient that would bring you lots of memorable moments together.

If you are looking for a pet to keep at home, you can consider both English Golden Retrievers and American Golden Retrievers. Both of them are fun and lovable to have at home. Sure, these dogs won’t disappoint their owners. In this post, we have already given you essential info regarding these two dog breeds. They have both differences and similarities. Hopefully, they can help you more easily to choose one that is suitable for you. 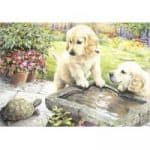 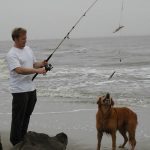