You are here: Home / Breed info / All about the Golden Corgi: Golden Retriever And Corgi Mix Breed Guide A mix of two famous breeds, the Golden Retriever And Corgi Mix is an active and loyal dog that is also known for being the Corgi Retriever or Golden Corgi. They are one of those designer breeds but with sheer luck, you can adopt one from rescues if you want to have them as companions.

If you are looking for an apartment dog then the Golden Retriever And Corgi Mix are for you. The Golden Corgi is a great companion for those who live in city areas where space is limited. However, they are still recommended to live in homes with sufficient space so it’s best to take them outside for some physical activity and fun bonding time with their owner. If you keep them satisfied, they will return the love tenfold.

If you want to know more about the Golden Retriever And Corgi Mix, read more below as we break down the fast facts you need to know about the Golden Corgi. This will help you decide if this dog breed is just right for you, as well as what to expect when you have to take care of it.

First, a little history lesson: let’s meet the parents of the Golden Corgi, which are the Golden Retriever and the Corgi:

This hunting breed has been around in the 19th century where it has been used in Scotland to create a companion for game bird hunting. They were prominently known for easily catching the downed game in either land or water areas.

So what exactly is the Corgi? Well, two types of Corgis are most likely the ancestor of the Golden Corgi, such as the Cardigan Welsh Corgi and the Pembroke Welsh Corgi. Both of them were included in Queen Elizabeth II’s family of lovable pets (more than 30 in her time), which led to its popularity.

When it comes down to the breed popularity, the Corgi ranks 18th (Pembroke) and 69th (Cardigan) respectively when measured by the AKC.

This hybrid broke out in Great Britain as a popular breed. Since the Corgi has been known for its English royalty roots, it comes as no surprise that the Golden Corgi is ever famous in the United Kingdom.

Eventually, around the late 90s, the Golden Corgi has been popularized in North America and their fame grew there. Even though they are a designer breed, many shelters nowadays already have them (scroll down below on how to obtain your very own Golden Corgi).

Physical Appearance of the Golden Corgi

As for the coat color, you can expect the Golden Corgi to be around the shades of golden, yellow, blonde, or any mix of the colors. This breed is relatively muscular and has a long snout. Like most dogs, they have a sweet smile and attractive eyes that will easily catch your attention.

It is easy to recognize a Golden Retriever Corgi Mix due to their short legs and pointy ears, which make them stand out from other mixed breeds. Depending on whether your dog descended from a Pembroke or Cardigan Corgi, the feet will be a little different. For instance, a Cardigan Corgi will have a rounded and outward curving set of feet while the Pembroke will have inward feet with an oval look.

Overall, you get a dog breed that has a short stature. The Golden Corgi is usually more on the Corgi side than it is on the Golden Retriever when it comes to the appearance as a whole. Despite that, you will find that its head will most likely resemble the Golden Retriever.

When it comes to temperament, you can expect the Golden Corgi to have loyalty to their owner. They will be quite affectionate and will stick by your side as long as you give them the right amount of love and care. The Golden Corgi Mix is also known for being intelligent so it is important that they get a lot of games to play around the house (and yard).

Since the two breeds pack a lot of intelligence, the Golden Corgi will most likely want to have mind-stimulating games. Other than fetch, you can also buy toys that will require them to work for their food (which is also a good preventive against obesity and destructive behavior).

If you are looking for a dog breed that’s quite the show-stopper then the Golden Corgi is one of the best bets for you. They are known to be quite the lively mutts that will keep you entertained for hours. The Golden Corgi enjoys a lot of fun activities due to their high-vigor temperament.

With proper training and handling, the Golden Corgi is going to be a rewarding companion for life. Sure, they could have a bit of stubbornness once in a while, but once you give them obedience training and lots of dedicated time to teaching them the right approaches, they will become less mischievous.

If you intend to own a Golden Retriever Corgi Mix, always consider having a lot of time and devotion to your pet. Make sure that they have a good training schedule and it is best to start as early as possible. Generally, the Golden Corgi Mix is a trainable breed so it is okay for most dog-owning beginners.

A good way to start is through obedience classes for your Golden Corgi. This will make sure that they will become less destructive when they grow up. On the other hand, exercising your Golden Corgi will need to be done more often because they are an active breed.

While we did mention that the Golden Corgi is an okay breed for apartment dwellers, this doesn’t necessarily mean that you should keep them locked up in your room! They need some attention and at the very least daily activities to keep them busy. This will avoid your Golden Corgi Mix in forming destructive behavior.

However, when exercising your pet, make sure that they get plenty of hydration while also keeping them cool, especially in the summer heat. Don’t overwork them and also consider keeping some treats to help maintain their motivation. With that in mind, they also need to have a balanced food intake (mentioned below).

Caring for a Golden Corgi

So, how do you care for a Golden Retriever Corgi Mix? Here are some tips to help you out with giving your Golden Corgi some dedicated TLC:

When grooming the Golden Retriever Corgi Mix, always make sure that they are brushed as regularly as possible to avoid tangles and mats. They have a fluffy coat, especially on their tail, so they must be well-maintained. As with most breeds, they need to be bathed as needed depending on their outdoor habits.

Aside from that, you should also properly brush your do’s teeth, clean their ears, and trim their nails. This will help keep your Golden Retriever Corgi Mix in tip-top shape and not smell off-putting (not just for you but also for family members and guests).

Moreover, a good hygiene regimen for your Golden Corgi Mix will help to maintain their health and keep them away from skin diseases and the like.

Due to the double coat, the Golden Retriever Corgi should have protection against extreme heat. This is because the Golden Corgi Mix is more prone to heatstroke because of their coat. Always consider cooling your dog down in the summer or you can use sunscreen (that’s formulated for pets).

The right feeding schedule will help your Golden Corgi to have the right nutrition. If you give them treats as rewards, you should always put them in your dog’s daily calorie intake. Giving them too many treats may also lead to obesity so always consider this as well.

Regular visits to the vet will also help your Golden Corgi to eat healthily. Some dog breeds (and dog lineages) will have a history of allergies, especially with food intake. If you suspect that your Golden Corgi Mix has some manner of food allergies, you can discuss this with your vet and they will recommend you a different brand of dog food or one with specific ingredients that will still keep your mutt healthy but without the food allergens.

While the raw food diet is okay for the Golden Retriever Corgi Mix, you should still be cautious because raw meat may have some bacteria. When in doubt, stick to kibble and food mixes in the market that came from organic sources.

The health of the Golden Corgi

As a mixed breed, the Golden Retriever Corgi may also inherit the health problems of their parents, which may include the following:

Because they tend to have problems with joints, you should consider giving them glucosamine-rich foods. Look for glucosamine and chondroitin the next time you shop for dog food for the Golden Retriever Corgi Mix.

As for the life expectancy, the Golden Retriever Corgi is known to live around 10 to 13 years depending on the care and support you give them. If you feed them quality food, exercise them properly, and clean them regularly, your Golden Corgi Mix is more likely to live longer.

Is the Golden Corgi a Family-Friendly Breed?

So, is the Golden Retriever Corgi good with family and kids? The short answer is yes, with the right care and respect for them. They do well with children and as a companion for adults. However, they need to be treated well and your child should know how to approach a dog to avoid any bad behavior forming.

If you properly educate your children and family members on how to take care of your Golden Retriever Corgi then it will not only live longer but happier. Your Golden Corgi Mix must get socialized as early as possible so that it will not be picky with strangers or form bad and destructive habits around the house.

When the Golden Corgi has been socialized properly, it may also behave well and make friends with other pets around the house.

Due to the Golden Retriever genes, the Golden Corgi is generally cool with other dogs and even cats. However, due to their Corgi genes, this may be the other way around, but there’s nothing that a good training program can’t fix at an early stage.

So, do you think that this breed is the right dog for you? There are two ways to get your own Corgi Golden Retriever: through a breeder as a puppy or adopting an adult from shelters:

When you consider a breeder for your Corgi Golden Retriever Mix, make sure that you’re ready to spend some bucks since it is a designer breed. If you do decide to get yours from a breeder, make sure that the breeder has the necessary health documents to prove that the puppy and the parents are healthy.

There are many adoption sites and shelters to find yourself a Corgi Golden Mix. However, specific rescues dedicated to them are still not that popular, so you’ll have to try harder. 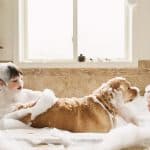